That is the unabashed marketing tagline for Sentosa Cove, Singapore’s haute island residence that has in the same vein been touted as the “Monte Carlo of Asia”.

Since the first homes were completed in 2006, Sentosa Cove has become the epitome of living the high life in Singapore. Its very name conjures up images of luxury waterfront bungalows, with private yachts berthed alongside. A tony residential retreat for the wealthy where “Lamborghinis, Porsches and Bentleys fill the driveways of multimillion-dollar villas”, Sentosa Cove is indeed home to Singapore’s well-coiffed and well-heeled.

For those of us old enough to remember the 80s TV show “Lifestyles of the Rich and Famous”, I think it would be apt to say that Sentosa Cove residents are having their “champagne wishes and caviar dreams” fulfilled.

Incredibly though, barely 10 years ago Sentosa was a very different island.

Sentosa Cove occupies approximately 120 hectares on the eastern end of Sentosa island, just across the harbour from mainland Singapore. It is Singapore’s first and only gated community and is home to the who’s who of Singapore. In fact, as it is the only place in Singapore where non-Singaporeans are allowed to buy landed property to reside in, Sentosa Cove boasts a veritable list of High Net Worth Individuals (HNWIs) from all over the world as residents. Today the over 2000 lavish waterside bungalows and luxury seafront condominium apartments within are home to approximately 6000 residents.

Not long ago however Sentosa used to just be Singaporeans’ humble family leisure venue, so the island’s relatively recent dramatic transformation into a resort home and playground for the rich and famous has caught many by surprise. Older generation locals still have fond memories of the island’s family friendly attractions we grew up with in the 70s, including the Butterfly Park and Insect Kingdom, the Fort Siloso war museum, the Musical Fountain with its then “high-tech” laser show, and later on the kitschy Volcano Land theme park with its lifelike volcano eruptions, and of course the Fantasy Island water park with its many water slides. 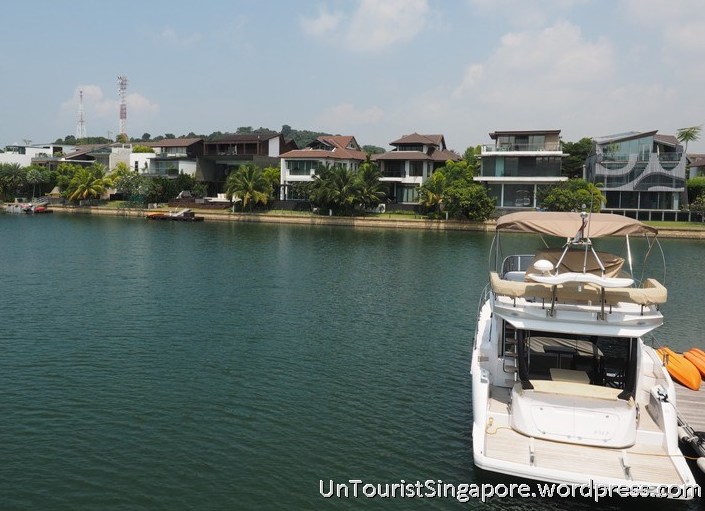 Back then in the 70s and 80s the only way across to the island was by ferry or the overhead cable car ropeway. A causeway, built in 1992, became a huge game changer allowing visitors to simply drive over to the island. Hotels and beach-side restaurants and other amenities soon followed, and Sentosa became a popular “staycation” venue for Singaporeans and even tourists who wanted to kind of get away for a day or two of fun and relaxation.

The transformation of Sentosa into a high-end retreat only began in 2006 however when the first affluent occupants took up residence in Sentosa Cove (although plans for the up-market residential enclave were put in place as early as 1986). A large area on the eastern shore of Sentosa including the small reef island Pulau Buran Darat was reclaimed and redeveloped to form the Sentosa Cove site. 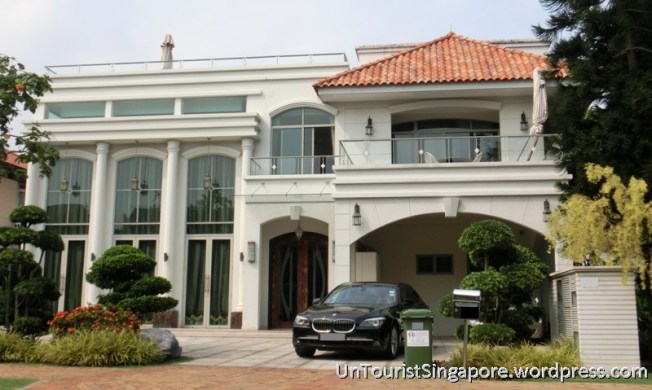 Outside of the Sentosa Cove residential area the rest of Sentosa was also undergoing a major revamp. 2010 saw a milestone reinvention of Sentosa with the opening of the glitzy Resorts World Sentosa, a casino resort that also housed the headlining Universal Studios theme park. The old cable car ropeway was also upgraded that same year.

Interestingly, the transformation of Sentosa from mass market leisure resort into a high-end residential and high roller retreat wasn’t the first transformation for the island. Before the island was renamed to Sentosa (which means ‘peace and tranquillity’ in Malay) in 1972 and developed purposefully into a tourist attraction, it was a naval base with the ominous sounding local name of Pulau Blakang Mati – loosely translated as “island after death”, a possible reference to a malaria outbreak on the island in the late 1840s.

An even more curious fact is that Sentosa was used as a detention site for one of the government’s earliest political prisoners – Chia Thye Poh, who was imprisoned on the island from 1989 and was not allowed to leave for the mainland until 1992.

With Sentosa now famed instead for its Sentosa Cove millionaire’s row, the island has certainly come a long way. It is probably more of a “Fantasy Island” now than the water theme park ever was.

To reach Sentosa Cove, drive eastwards once you enter the island along Allanbrooke Road, past the golf courses. Once past the arches of Sentosa Cove you’ll arrive at the dolphin fountain and Sentosa Cove Village, or the Cove Arrival Plaza. Continue left and you’ll see Quayside Isle, a restaurant and shopping plaza fringing the marina’s boardwalk. Up ahead is the W Singapore luxury hotel, and on the other side the ONE°15 Marina Club. While the restaurants in Quayside Isle and the hotel are open to the public, the restaurants and facilities within the marina club are open only to members and their guests. 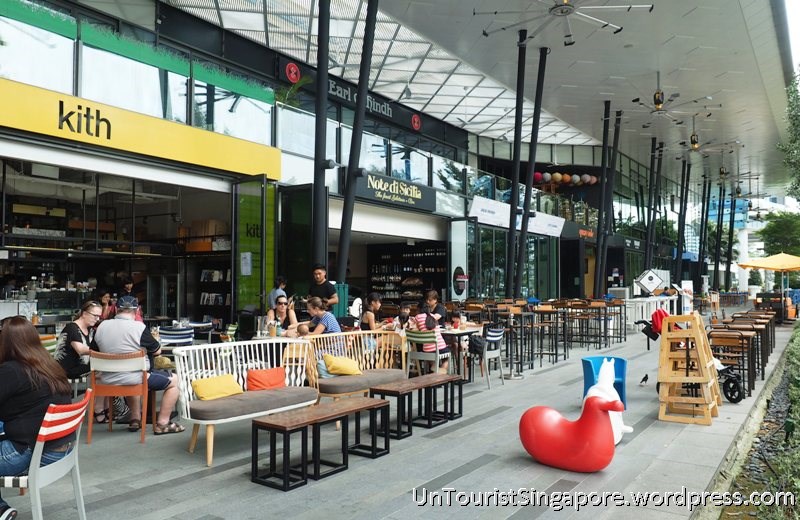 Quayside Isle is a great waterfront dining venue especially if you want some respite from the city, or if you just want to soak up the glamour of the Sentosa Cove lifestyle. Notable restaurants at Quayside Isle include chef/owner Emmanuel Stroobant’s Saint Pierre offering his acclaimed modern French cuisine; Spanish seafood and tapas grill Sabio by the Sea, as well as the Blue Lotus Chinese restaurant and the Earl of Hindh Indian restaurant that cater to the many Chinese and Indian nationals living on the island. More casual dining options include Brussels Sprouts, known for their Belgian beer and mussels, or Picotin Express bistro or SolePomodoro Trattoria for wood-fired oven pizzas and casual European and Italian fare respectively. Kith cafe too is a great place for a coffee and a light bite, and is usually packed during the day with island residents and non-residents alike. 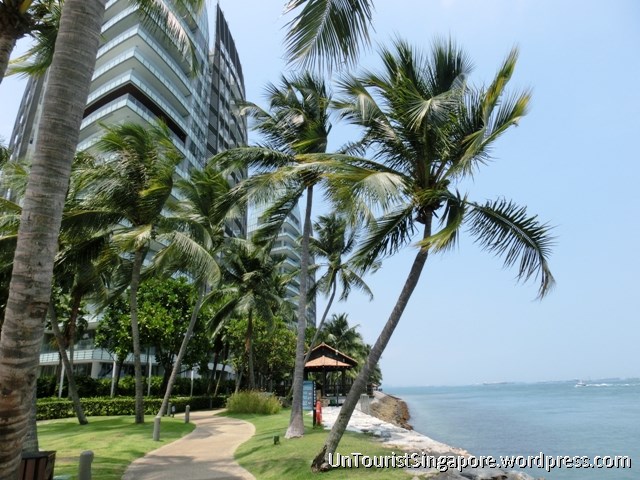 Opposite Quayside Isle you have the Residences at W condominium. Go left and you’ll be in North Cove, where you will cruise by the houses along Ocean Drive and on 3 small artificial islands – Treasure Island, Paradise Island, and Coral Island. Virtually all the houses have yacht berthing facilities. Continue along the sea front road and you will come across the condominiums The Azure, The Berth by the Cove, The Coast @ Sentosa Cove, and The Oceanfront @ Sentosa Cove, all sea-facing with gorgeous views.

If you turn right at the dolphin fountain junction you’ll be in South Cove, where along Cove Drive there are similarly 2 artificial islands – Sandy Island and Pearl Island with more waterfront homes. There is also a development featuring cluster terrace houses called the Green Collection, while condos on South Cove include the Marina Collection, Turquoise, Seascape, the very exclusive Seven Palms Sentosa Cove by luxury developer SC Global Developments, and the newest and tallest condo on Sentosa Cove – Cape Royale.

Both the North and South Coves have lovely green park spaces fronting the coastline called “Foreshores”, which are reclaimed coastlines. These beach front areas shored up by a stone embankment feature an automatic irrigation system to keep the well-groomed lawns in tip-top condition. The pleasant open spaces have shady trees (even a fruit-bearing cashew tree), and park benches and wooden gazebos to rest in and enjoy the strong sea breezes. You’ll also be afforded wide open views of the Singapore Strait and the nearby Tanjong Pagar Port with its container ships pulling into and out of the busy port. On Sundays, domestic helpers lucky enough to be employed by families living in Sentosa Cove like to gather at these areas for a bit of R&R themselves.

One thought on “Sentosa Cove: “The World’s Most Desirable Address””