In the far corners of Singapore’s west lie 2 sleeping dragons, or actually “dragon kilns”, and it was by sheer luck that we stumbled upon the dragon’s lair.

Dragon kilns (龙窑) are an ingenious ancient Chinese invention. Consisting of a long firing chamber built on a hill slope with various stoke holes on the side, dragon kilns operate on the simple principle that hot air rises and so efficiently maximize the heat produced within the kiln. When the entire kiln is fired up it flames, smokes, hisses and bellows, hence the name “dragon kiln”.

The earliest dragon kilns are now believed to have existed about 3000 years ago, after a large dragon kiln site unearthed in China’s JiangXi province in 2001 was thought to date back to the Shang Dynasty (1600-1100 BC). There are few remaining dragon kilns in China today.

Although the kilns have long since been retired from commercial operation, replaced by newer and less labour-intensive electrical kilns, they were restored in 2001 after the national authorities recognized their historical value and deemed the dragon kilns part of our national heritage. The 2 sites recently had their leases extended (till Dec 2017/Jan 2018) with the option for further extensions. Both sites operate as commercial operations today offering pottery lessons, studio rental and ceramic items for sale. The dragon kilns are only very infrequently fired up on special occasions, and even then only a section of the kiln is fired.

Inside the dragon kiln

The dragon kiln is made up of a front firing chamber (the firebox), the main chamber where ceramic pieces are fired (containing anywhere from 3000 – 5000 pieces), and a chimney at the tail end where smoke and hot air are released. There are stoke holes along the length of the chamber to feed wood and to observe the fire.

Firing up the dragon kiln – courtesy of Thow Kwang

The process of firing the kiln is a long-drawn out process that can take up to 36 hours, as the kiln reaches a maximum temperature of 1200-1300 degrees centigrade. The entire ceramic production could take up to 6 days, as the fired ceramic products need to be left to cool for a few days.

There is also an old “kampong” (“village” in Malay) house at the back where the owners live. While it’s okay to take a peek from a distance please be sensitive and not go poking into the private quarters.

This is further down the road, you’ll have to drive or walk over a gravel path to reach it. In addition to the dragon kiln there is also a gallery, and an open studio which caters to professional as well as hobbyist potters. You can rent space as well as the pottery equipment and participate in workshops too.

There is ongoing construction in the area and the turn-off to Lorong Tawas off Jalan Bahar is currently closed. You have to enter via Nanyang Avenue (on the way to Nanyang Technological University) and turn on to Clean Tech View instead. There are signs pointing the way to the dragon kilns so just follow the signs.

Approximately 20 minutes in each place just to check out the kilns. Allocate more time at Thow Kwang if you want to browse their huge storehouse of wares, and at Jalan Bahar Clay Studios if you are interested in the artworks at the gallery.

If you are really keen on seeing the dragon kilns in action, check the websites of both kilns to find out when they organise firings. The Thow Kwang dragon kiln was most recently fired up on September 13, 2013. 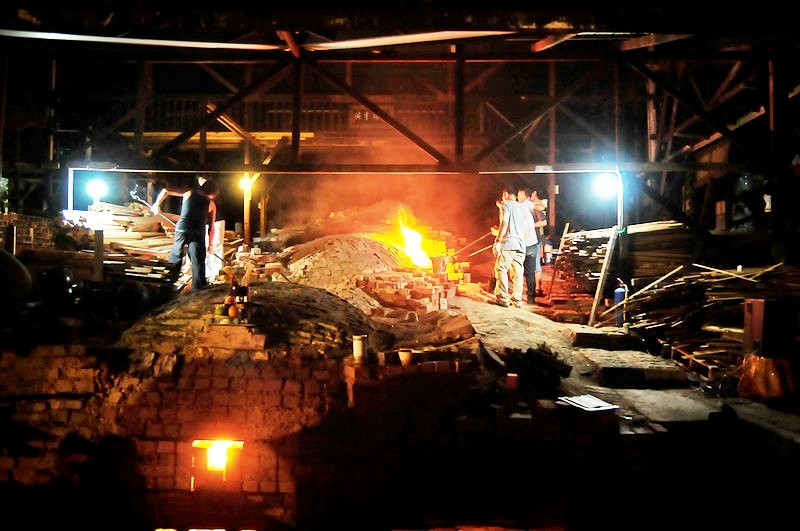